Visit to Canberra in November '09

It was in late 2007 that we first did a catalogue search of archived song recordings, collected by anthropologists over the last century and held at the Australian Institute for Aboriginal and Torres Strait Islander Studies (AIATSIS) and found a number of recordings of which those we spoke with at Nguiu were unaware.

As a group strongly connected to each other and their community through song these recordings encapsulate much of their identity and so requesting their return was of great importance. It became very important to the elders that the songs held at AIATSIS be repatriated in order to document the knowledge in the old songs before it is too late.

Unfortunately, it did prove too late for two senior and revered singers; one gentleman and one lady who had been part of the group requesting the material passed away in early 2009. Due to complex issues of copyright, cultural restrictions and usage permissions it became clear that the only way they were going to gain access to their songs was to go to Canberra themselves. After months of fund-raising and planning, in November 2009 a group of 11 Tiwi elders went to Canberra, visiting AIATSIS as well as the National Museum of Australia, the National Film and Sound Archive and the Macleay Museum (Sydney University).

Hearing the voices of revered ancestors for the first time was a significant and moving experience for the group. We discovered songs long since forgotten as well as very old songs that have been passed down the generations and are still performed today.

The repatriation of this material has had a great impact on the community as the elders use it to teach young people the stories and the old language while the knowledge is still there. Much of the music performed within Ngarukuruwala has come out of this reconnection with the old songs and their performers that have been preserved in the archives.

The elders hope to inspire the next generation to continue their song tradition by showing how the old songs can be relevant in the modern world.

We gave a performance at the NFSA

Genevieve was at Nguiu for three months at the start of 2010, working with the senior songmen and women to listen through the old recordings to work out who was singing and write down as much of the old language as possible. Only a few people are left who know the old language of these old songs so it is important to write the text down and create translations into Modern Tiwi and English so that the stories and meanings are not lost.

Due to the poor quality of some of the recordings (made on wax cylinders in 1912 and 1928 and reel to reel tape in the 1950s and 1960s), it was difficult to make out all the words – especially in the 1912 and 1928 recordings. Even so, the elders have been able to distinguish enough text to give social, historical and ceremonial context to the songs and by following the family and country group song-ownership lines back through generations of leading songmen, give names to the voices on these recordings. 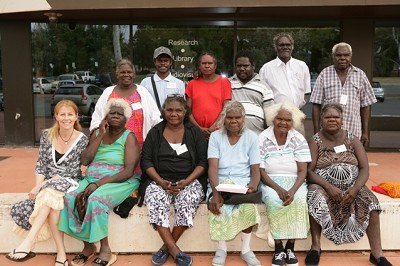