The last year has seen more recording, more singing, more playing and more work on old songs. The elders have been going through all the old song recordings we repatriated from Canberra with painstaking patience and we’ve uncovered some gems. Old man Justin Puruntatameri has had the extraordinary experience of hearing himself, as a much younger man, singing for a researcher’s recording machine in 1974.

Although quite hard of hearing now, he has been listening to his own voice (and commenting on how great it was!) and helping his daughters write down the words in proper Tiwi song language. We are collating these into a teaching resource, along with English translations, in the hope that young Tiwi men and women will one day take over from him and sing in ceremony.

UPDATE: Mr Puruntatameri passed away in late 2012. He was regarded as the last man initiated into song in his community. He is sorely missed.

The Strong Women continue their successful performance outings. In February 2012 they sang at the Chief Minister’s Event at NT Parliament House to commemorate the 70th anniversary of the Bombing of Darwin. The Tiwi mob saw the planes flying over first and tried to warn the mainland.

A song and dance were created years ago to tell this story and the women were proud to be asked to perform it for the Prime Minister, the Governor-general and important guests and Veterans. Calista Kantilla and Leonie Tipiloura were little girls back then and remembered the planes.

In August 2012 the band flew up to Bathurst Island to perform with the women at the Milimika Festival. This was a massive event for the community and the women wowed their grandchildren with a fantastic groove.. culminating in an impromptu dance to Wipeout!

We continue to work together on song transcription, recording traditional songs and engaging Tiwi children and young people in projects aimed at instilling pride in their culture with songs as the key. 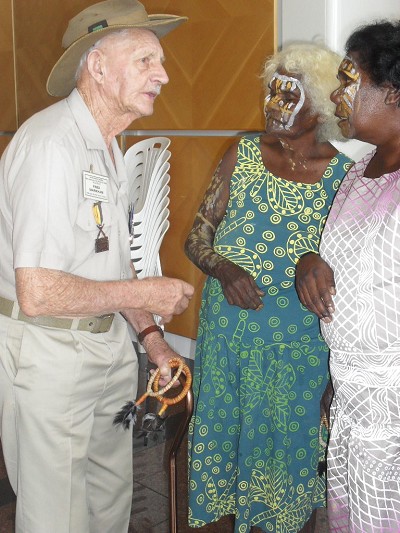 Leonie Tipiloura (centre) and Teresita Puruntatameri chatting with a gentleman who was on the island during the raid (sorry I didn’t catch his name). 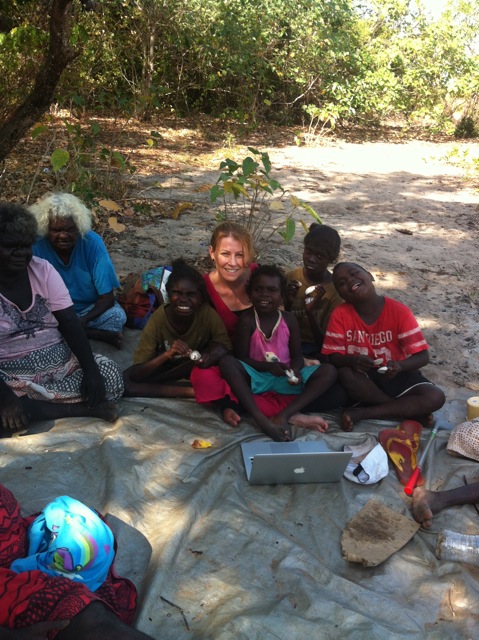 In May 2014 we spent a week together for a “Kakirijuwi Yoi – Kids Dance” project. Elders led the children in sessions listening to old recorded (traditional) songs of their own dreaming. The kids then created their own dance tracks using computer digitised sounds and sampled recordings. We hope to end up with some seriously hip tracks for the local disco that are based on Tiwi music, are in language and reflect Tiwi culture. This project is being funded by the Red Cross (Northern Territory) Communities for Children programme and we are very grateful, thank you.

This project continued into 2015, with each family group creating songs to suit their kids’ country and dreaming affiliations.